← Wild Things of Oaxaca
Nothing Is Simple →

On the way to Puerto Escondido, which is a “tourist trap” according to my daughter and Conan, we stop to visit the Reformas’ and stay at a hotel right by the beach.  Yes, the one where the crab climbs the wall in my room.

We spend an afternoon on the beach, Cerro Hermoso, {Beautiful Hill}, relaxing in the shade of a thatched roof, with ocean breeze, cold drinks and more food.  Here we are. 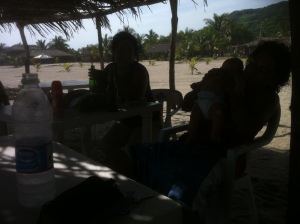 {Yes, a flash on this picture would have been nice.  But it sure shows how well shaded we were!}

Looking back, I realize that I’m a bit cranky by the time we get to the beach.  The journey up had been challenging.  Lunch at the Reforma’s was great, and completely outside my comfort zone.  We hadn’t checked into our hotel yet ~ and the whole time I was there, I never knew what was going to happen next, and ~

Yeah.  I might have been feeling a bit cranky.

As soon as we get to the beach, i race to the edge of the water and walk for a few minutes.  That helps .  One wave out runs me, and soaks me to the thighs – but it’s still too hot to stay out there for long.

Senor Reforma strings this hammock up for me and suggests I relax and watch the ocean.   Oh, yes, thank you. 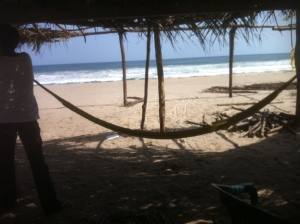 I ignore the conversation at the other end of the hut ~ which I don’t understand anyhow.  I lose myself in the roar of the waves, the ocean smell, the gentle rock of the hammock…

When it gets cooler, Paulina and I go for a walk on the beach, climb the rock jetties at each end of the area, and pick up a couple of shells.   She shows me some kind of little crabs, almost invisible in the sand, that run like mad when you step near them.

She talks a little bit, and I only catch a few words, but it doesn’t matter.

The sun is starting to go down ~ even though you can’t tell here. 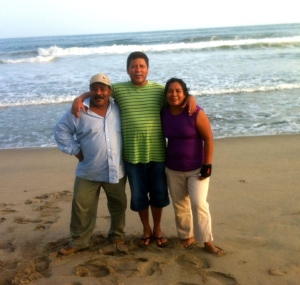 That’s Arturo in the middle, Paulina on one side, Senor Reforma on the other.  Huge, beautiful waves in the background.

This is me, Arturo, Lucia, Paulina, and Julia. 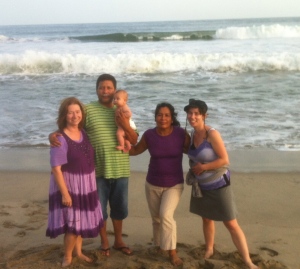 The waves are too big to swim in, and I didn’t bring a bathing suit anyhow.  But the hotel has a lovely pool. 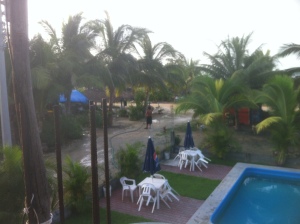 The next morning. I enjoy a cup of coffee, with milk, just the way I like it, in the hotel dining room.

Notice anything unusual about these pictures?

We have the beach to ourselves.  No one at the pool.   There are other restaurants and stores, but they all look like this ~ chairs tilted against the table, empty, or actually closed.  How strange…  where are the people?

Senor Reforma and Arturo explain. They say, this used to be a thriving resort area.   Surfers in the beach, and a recessed area where the water came in and created a swimming area with “soft” waves, gentle enough for children.  Lots of tourists, stores, restaurants and two hotels.

In 2003, they say, the government started a project to “improve the beach.”  I’m not clear on what they mean.  But   rock jetties were built on either side of the bay.

The area that had been safe for children, disappears.  The water no longer fills it.  Now, it’s just sand.

And the waves in the other part of the beach are too strong for swimming or surfing.

Arturo and Senor Refomra are angry with the government for not fixing it back.

So is the author of this blog site, who has a video/slide show about it, and a description, in Spanish.  I did an on-line translation of the written part, you can read that at the end of this post.***

There are pictures from 2004 on this site.

But it seems like the government must have had some benign cause in mind when they started the project.  Dee and I try to piece together information from the internet.  I learn this about Cerro Hermoso:

Six of the residents speak an indigenous language as well as Spanish.

There are about 44 households, 28 of them have an indoor bathroom.   One is connected to public water.   Thirty-eight of the homes do not have floors.  About 24 of them have one room only.  36 have access to electricity.

None of them have a computer, 7 have a washing machine, and a whopping 23 households have one or more televisions.

This is on the way to the beach, next to the hotel.

In my internet roaming, I also find this:

In Cerro Hermoso, there is a bocana (river mouth) where the sea exchanges waters with the lagoon. Due to the presence of a seawall, a giant salt water pool is formed where you can enjoy a good swim without danger.

So that was the pool they were talking about, the one that isn’t there anymore.   Here’s where the pool used to be: 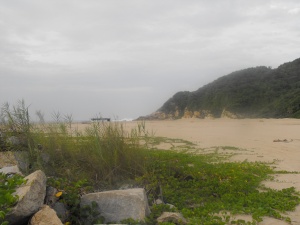 Dee and I are speculating that maybe the government built the jetties to keep the sea water from going into the river?  Dee says you wouldn’t want sea water in the river, and that makes sense, I think, but  I don’t know.

If you know more about it, or decide to research it and find something that explains it, let me know.  What I know is that the tourists are gone, leaving 166 residents, a hotel, restaurants and some stores in a Ghost Town Beach.

*** {Here’s a poor translation of what the Professor says on the website:

In 2003, through deceit, they were built in the bays of Cerro Hermoso Tututepec Oaxaca, a few stone jetties, dial a project of Government that benificiaria to all the inhabitants of that place, but they were not built according to the project, or with the approval of all the inhabitants, but that aprovechandose of political power and alliance of some few corrupt place, did his misdeed… took maybe a year or a little more, but after this Bay is cerro, leaving instead of water only sand… that triztesa that to date the Government has not supported for open bar… and coming new elections and certainly began campaigning, deceptions and promises…    Author: Prof.  P.S.

← Wild Things of Oaxaca
Nothing Is Simple →