Warning:  This is about celebrations, but it’s not necessarily a “feel good” post.

Lots of celebrations in Juquila.  In all of Mexico, I suppose, but I mostly know Juquila.

Of course, girls have a quinceañera,  ( Spanish: “fifteen years celebration”)  also called quince años.  According to the on-line Encyclopedia Britannica:

“…this is the Mexican celebration of a girl’s 15th birthday, marking her passage from childhood to adulthood. The traditional quinceañera is both a religious and a social event that emphasizes the importance of the family and society in the life of young people.”

I didn’t go to any quinceaneras.  Conan described them to us, and they sound like a huge big deal.  I’m not sure how I feel about celebrating a 15 year old girl’s transition to adulthood, but am not going to worry about that today.

I saw this celebration outside the church, with dancers: 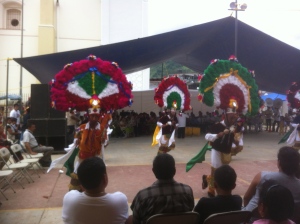 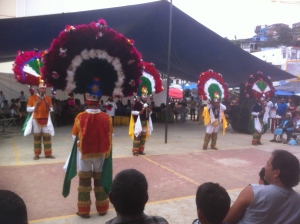 I don’t know what they were celebrating.  It kind of reminded me of World Fest ~ isn’t that funny?  And the dance was similar to Irish clogging, at least to my untrained eye.

What I remember best from that part of the afternoon is watching a group of children playing.  They get a ball stuck in a tree.  Several adults try different strategies to get the ball down, while others of us watch hopefully.

A stick is not long enough.  Another man is not able to shake the tree limbs enough to get the ball down.  A third man has a package of some kind.  He throws the package at the ball, and succeeds ~ in getting the package stuck in the tree too.

We move on then, and I wonder if the ball and the package are still up there, even now.

Here is another celebration.  I hear the music from Paulina’s house and come out to take some pictures. 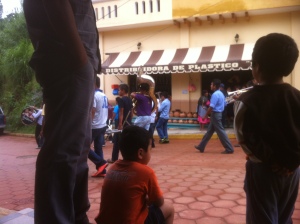 It goes on for a long time.  After it is almost gone, I ask Conan what the celebration is.  He hesitates a minute ~ shrugs, “I don’t know,” then says ~ “Wait!  Yes, I do.  It’s the three year birthday celebration!  ‘Coz look – here she comes with her parents.”

I missed the picture, you’ll have to imagine it.  At the end of the parade,  a cute three year old girl dressed in a long pink dress, with a full skirt, walking along holding her mommy’s hand on one side, daddy on the other ~ presumably, anyhow.

Conan nods, frowning a little.  “Yes,” he says, “that’s because three years, I think, is considered some kind of cut-off, like if you make it to 3 years old, the parents are grateful and have a special party because you’re probably going to live.”

I’m not sure what to think of this ~ that’s why I miss the picture, standing there pondering.

But I decide it makes perfect sense.   In fact, I kind of wonder why we don’t do it.

Surely everywhere the early years are the most risky for losing a child.   Do we just prefer not to think about it?  I can’t think of anything we do that is this kind of recognition or celebration.

Of course, the easy answer would be if the mortality rate were lots higher for children under 3 in Mexico than in the U.S.   But when I consult the World Bank information, I’m not convinced that’s it.

The CIA “The World Factbook” ranks countries by rate of death of infants under one year, estimating for 2012.  By this standard:

If  that sounds like a big difference, consider that Afghanistan is first, with over 121 deaths per 1000.

I think it’s interesting that the U.S. number drops from 8 deaths for the under-5 category to about 6 for the under 1-year old, while Mexico’s number is about the same.  I don’t think it’s a straight comparison, but if the U.S. had 8, we would be in the 150’s, along with Bosnia and Latvia.  And does that suggest that we have a higher rate of infant mortality than Mexico between one and five years old?

I know, you can’t compare different sets of data like that.  It’s just something to think about, right?

But I don’t think the answer to this cultural difference lies in the data.

I think the difference ~ maybe ~ is in our tendency, in this country, to want to avoid thinking about death.  We don’t want to talk about it or think about and really, we’d prefer for nobody to do it.  Ever.  Which would be interesting, wouldn’t it?  Imagine family reunions with 10 and 12 generations…

Ok, that’s silly, but you know what I’m saying ~ or if you don’t, it would take me a whole other blog post (at least) to explain it.

I don’t like thinking about death either.  Particularly the deaths of children under the age of 5.  But they happen.  We can’t prevent them all.

In Mexico, when this particular bad thing doesn’t happen, they celebrate.

Posted on August 20, 2012, in Uncategorized. Bookmark the permalink. 2 Comments.