I am not the type of person who looks at unfamiliar food and says “Ewwwww…”  My mother was a “try three bites of everything” kind of parent, so I’m not afraid of experimenting.

And I already have a “food in Mexico” story from when I was nine.  We spent a month in Mexico then, and I remember going to a nice restaurant , where I ordered fish.

When it arrives, the waiter presents it to me with a flourish.  In an oval dish ~ at one end, the tail almost hangs over it.  At the other end, is the head ~ the eye staring straight up at me.

The waiter sets the plate down, beaming.

My mother waits til he walks away to explain that in many cultures, the head is left on while cooking because it enhances the flavor of the fish.

I just keep looking at the eye, which is looking back at me.

And then Mom asks me if I want them to remove the head before I eat it.

With great relief, oh, yes, please, and thank you very much!

She says something to the waiter about people in America being funny about things like the head, and asks him to remove it.  He is clearly a bit surprised and baffled, but very nice about it.

I eat the fish, head removed, and it was delicious ~ I still remember that too.

So I’m not surprised when Senor Reforma serves fish fresh from the ocean with head and tail still attached.  He serves it battered and fried one day, baked in the wood burning oven the next.

His wife, Senora Reforma, makes fresh tortillas for each meal,

She places the batter in a wooden press, 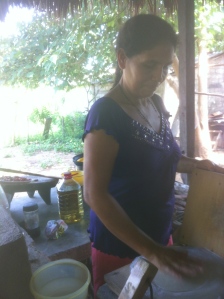 and bakes them on the wood-burning stove. 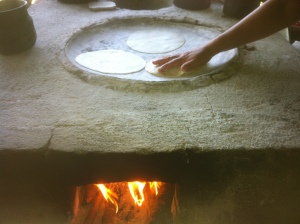 We serve ourselves the fish, from platters.  It is not filleted either time, and this is not a surprise either.  You just open it, remove the backbone, other visible bones, and eat carefully.

I deftly avoid taking any of the head.

It is delicious.  Absolutely delicious.  Forks are optional.  We eat by tearing off pieces of fresh tortillas, still warm, and wrapping them around pieces of fish, making our own tiny tacos.  They are better at this than I am, managing to eat daintily, while I eat more like a five year old.

We can eat our salad the same way.  The salad is lettuce, tomato, lots of avocado, and onion.  Rather than salad dressing, we squeeze fresh lime over it.  I watch Senor Reforma unwrap the limes from the green leaves around each one ~ that’s how fresh they are.

Unlike Mexican restaurants here, not every meal comes with beans and rice.   Sometimes that’s part of it, often not.  Meat is a big staple though ~ chicken, pork, beef, and so on.  Senor Reforma serves seafood, Paulina serves meat from the local farms, or Arturo brings her some from places he goes that have good meat.

We have meatballs at Paulina’s, that her sister comes over to make for us. 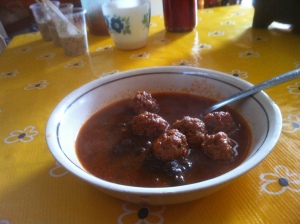 Pasta and potatoes are not staples.  Everything is served with tortillas, tostadas, empanadas or tacos.  A friend of Conan’s stops by with some creviche for us to try.

It’s in the plastic cups with spoons – ignore the flowered cup with my coffee.   I’m familiar with shrimp creviche, so I learn that “creviche” refers to the way it’s fixed.  It’s a little spicy, but not too hot, even for me, and I like it.

The afternoons we spend at the beach include snacks ~ tortillas with melted cheese, then you can add bits of other food to ~ shrimp, meat, diced tomato, onion, avocado.  Lots of avocado, which I love.

I have shrimp cocktail, which is cut-up shrimp, mixed with onion, maybe, and some avocado, I think, and served in a glass cup with a kind of cocktail sauce.  Delicious.

Everything is fresh.  I don’t know if Paulina has a can opener.  There are no cans in sight.

Here’s Emmanuel with some sugar cane.

You can peel it and slice it, and chew on a piece, sort of sucking the sugar out of it. That’s what he has in his mouth.

In Puerto Escondido, I order shrimp soup.  It’s very tasty, and comes with probably 10 or 12 whole shrimp in it.

Yes, whole.  With the head.  I hadn’t thought about it, but realize it when they bring it and I see the thin, red feelers from the one of the heads hanging over the side of the bowl.

For just a minute, I sigh. Damn.

But that’s ok.  I scoop  each one out, remove the head, peel it, and enjoy some delicious, fresh from the ocean, shrimp.  Life is good.

Paulina tells a story about Emmanuel that amuses us all.  He was eating some fish, with the head on, and she says to him, “Hey, Emmanuel, are you going to eat that eye?”

He grins and says, “No, because I want him to see me eating him.”  Or something like that.

I laugh, even though I’m pretty sure I don’t know get the context of why they think that’s funny.  I  laugh because it’s the exact opposite of the way I felt at nine, confronted with that fishy eye looking up at me.  It reminds me that so many things we think are “the way things are,” are really just the way we’re used to things being.